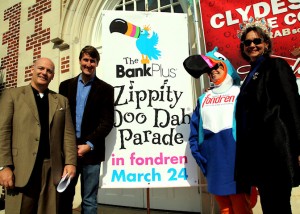 In a press conference held this morning in front of Fondren’s Duling Hall, organizers announced plans for the Second Annual Zippity Doo DahÂ® Weekend in Fondren. The fun begins Thursday, March 22, 2012 and will end with the BankPlus Zippity Doo DahÂ® Parade on Saturday, March 24, 2012. The weekend will start with a bang and end with a BOOM.Â As a special part of the weekend, it was revealed that the world famous Budweiser Clydesdales would be in Fondren all weekend. If that’s not enough,Â Friends of Children’s Hospital will present the Patty Peck Honda Doo Dah â„¢ Blue Car Giveaway, a raffle of a brand new 2012 Honda. The winner will be announced Saturday night after parade. And, JSU’s Sonic Boom will be featured as part of the Saturday parade!

Kicking off the three day fest on Thursday, March 22, BancorpSouth presents Arts, Eats & Beats — an evening in Fondren featuring a variety of local bands playing throughout the historic area, in addition to Fondren merchants and restaurants staying open late.Â A special attraction to this year’s annual Fondren Spring Arts, Eats & Beats will be the WJTV Battle of The Bands Competition. Come hear the winning band perform live on the Ergon Stage right in the middle of Duling Avenue. Â This event is free and open to the public.Â On Friday, March 23, the Big Hat Luncheon at Sal & Mookie’s will take place at 11 a.m. This is a ticketed event and seating is limited. In the evening, Fondren will host a dance concert on Duling Avenue featuring The Bouffants. This event is free and open to the public as well.Â

On Saturday, March 24, Amazon Publishing presents “Bacon, Biscuits, Bloodies & Books” — Jill Conner Browne’s ninth book release and book signing at 10:00am in Duling Hall. This is a ticketed event that includes a copy of the new book, FAT IS THE NEW 30: The Sweet Potato Queens’ Guide to Coping with (the crappy parts of ) Life.Â Two children’s carnivals will run throughout the day on Saturday beginning at 10 a.m. with the Sal & Mookie’s Children’s Carnival,Â partnering with Parents and Kids magazine,Â on the Veterans’ Memorial Stadium green space and the Blair E. Batson Jump Zone on Duling Lawn. There is an armband charge good for both carnivals.Â Live music will be throughout the district during the day and a special mid-day attraction you will not want to miss — Clear Channel presents The Mississippi Mass Choir. Parking is available at the stadium for $5 to benefit Batson and the Fondren Express Trolley will offer a free shuttle.

The weekend ends with a BOOM on Saturday night at the BankPlus Zippity Doo Dah Â® Parade. The nighttime parade begins at 7 p.m. featuring the world famous Sweet Potato QueensÂ®. Grand Marshal of this year’s parade is Dr. Carolyn Meyers, incoming president of Jackson State University. Parade headliner will be JSU’s Sonic Boom presented by Richard Schwartz and Associates. The theme of the 2012 Parade is THE AMAZON: RUN THROUGH THE JUNGLE. After the parade, a street dance on Duling Avenue featuring the Delta Mountain Boys is free and open to the public.Â