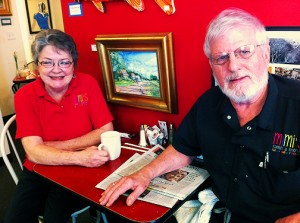 A longtime Jackson restaurant owner says it’s time for the next chapter in life. Jim and Linda Burwell, owner of Mimi’s Family and Friends, say they will not renew the lease on their North State Street breakfast-lunch spot. The tentative close date is now said to beÂ FebruaryÂ 29. “It’s been a lot of fun the last two years”, Jim Burwell said, “and we’ve met alot of really nice people. We wish we could keep doing it”. For now, he and Linda are reminiscing. “We’ve lived here, we love it here”, she says, “and we opened Mimi’s Family and Friends toÂ reacquaintÂ ourselves with old friends. I think we have accomplished that”. Linda says it’s sad, but, you move on. Jim is quick to point out that he feels they are “going out on top”.

When we asked Linda what her plans were, with a chuckle, she says she’ll take two months off. Jim interjects: “she loves her garden”. And Linda echos this, saying she would like to arrange flowers. The pair have no plans of slowing down. Jim isÂ negotiating with a group who is opening several restaurants in theÂ JacksonÂ area and will probably be involved in a management role. “I’ll have more to say after I close a few loopholes”, he tells us. As the former owner ofÂ Burwell’s Deli, Sister’s on Fortification and Lloyd’s Kitchen on Northview, Jim says theÂ menuÂ has been exciting at Mimi’s, something he has wanted to make unique. “We tried to have things here that weren’t on any other Fondren menu”. And it kept people coming back – or hanging around. “We have had people come in for breakfast and literally stay for lunch”.Â

Dine with Mimi’s before they are gone for good. The restaurant is located at 3139 North State Street in Fondren.

Update: We originally noted March 31 as the closing date. Mimi’s has moved the date up to March 5. The change has been made in the headline and story.