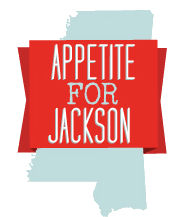 A new festival premieres in neighboring downtown Jackson at The Art Garden at the MississippiÂ Museum of Art on Saturday, January 28 from 2 to 9 p.m., as a result of a call from the producers of ‘Bizarre Foods with Andrew Zimmern’ to Jackson chef and raconteur Tom Ramsey.

The Appetite for Jackson festival will be the first of what will be an annual event that celebrates theÂ revitalization of the city, its cultural and culinary excellence, and its people’s ability to work together and getÂ things done.

The festival will be held in The Art Garden at the Mississippi Museum of Art, Jackson’s newly opened publicÂ green space and performance venue, and will feature live music and showcase an array of local restaurantsÂ and their talents, including Parlor Market, Underground 119, Peaches, Lumpkins Barbeque, the King EdwardÂ Grill, The Palette CafÃ© by Viking, and many more. Live music from local bands will rock out The Art GardenÂ throughout the day.

Admission is free for those wanting to enjoy the musical talents of over seven local bands. Food plates fromÂ participating restaurants are available for $5. Craft beer will be available for sale from Capital City Beverages.

A portion of the proceeds from food and beverage sales will be donated to the Rock It Out MemorialÂ Scholarship in honor of the late Craig Noone and his Miracle League of Jackson charity.

This festival will be shown on an upcoming episode of the Travel Channel’s new show, Appetite For Life, andÂ will allow the nation and the world to see Jackson and its people at their best. Zimmern and his production teamÂ from Appetite For Life will be in Jackson Saturday and Sunday to experience Jackson. Andrew Zimmern willÂ be appearing at the festival and at VIP events that will be scheduled.

For more information on this event, visit www.appetiteforjackson.com and become a fan on Facebook. FollowÂ the event @Appetite4Jxn on Twitter.

Find It In Fondrenâ„¢ supports the renaissance of our own neighborhood but also our city as a whole. Events such as these in neighboring areas are part of what makes Fondren a great place.