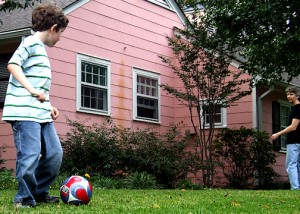 Thanks to good friend Tommy Rueff, I recently read “Outliers” by Malcolm Gladwell. Gladwell describes an investigation conducted by Stewart Wolf, a physician who taught in the medical school at the University of Oklahoma but spent his summers in Pennsylvania near the little town of Roseto.Â  Wolf was astonished to learn that it was rare to find anyone from Roseto under the age of sixty-five with heart disease, and his investigation quickly confirmed this.Â  He further found that there was no suicide, alcoholism, drug addiction, welfare and very little crime. Â

Wolf began to pursue an explanation, ruling out diet, location and genetics, yet realizing that the good health of the Rosetans had to do with Roseto itself.Â  Gladwell writes,“They looked at how the Rosetans visited one another, stopping to chat in Italian on the street, say, or cooking for one another in their backyards.Â  They taught about the extended family clans that underlay the town’s social structure…and saw the unifying and calming effect of the church.Â  They counted twenty-two separate civic organizations in a town of just fewer than two thousand people.Â  They pick up on the particular egalitarian ethos of the community, which discouraged the wealthy from flaunting their success and helped the unsuccessful obscure their failures.” The Rosetans were healthy, he concluded, because of the world they had created for themselves, based as it was on a powerful, protective social structure that protected them against the tensions and pressures of the modern world.

So, I have to ask, is Fondren good for your health?Â  I think so!Â  Fondren Renaissance Foundation is one of those civic organizations as was found to be pivotal in Roseto and the health and well being of its people. Not built on the paesani culture of southern Italy to be sure, FRF was founded instead upon the equally sustaining Southern culture that embraces hospitality, mutual respect and tolerance. At a time when these virtues are especially difficult to find in American society, Fondren’s place in our community is especially important. If you are not familiar with what the Foundation does for our community, go to its website at fondren.org or better yet visit its office at 3318 North State Street.Â  There you will see displayed the multitude of events Fondren sponsors, such as Fondren After 5, Arts, Eats & Beats, Four Seasons of The Cedars, Fondren UnwrappedÂ  and, of course, Symphony At Sunset.Â  You will also see the projects Fondren has implemented, including housing rehabilitation with the Phoenix initiative, adoption of Boyd Elementary School and (the new) Fondren Park. Â

I am frankly happy with what I have seen transpire in Fondren during the years, and bear with me while I highlight them, because I hear all too often that there is confusion about all these civic associations in Fondren.Â  (In 2009), FAB, Fondren Association of Businesses, was formed and is thriving. It has helped make Fondren a destination to shop from outlying counties. Woodland Hills is one of the oldest neighborhood associations in Jackson, is active, and its members were instrumental in the formation of Fondren.Â  The Broadmeadow Neighborhood AssociationÂ  represents “The Top of Fondren” and has regularly sponsored a 4th of July Parade, as have other neighborhoods, and has for three years running held a “Blocktoberfest,” a great event for families. Â

Then there is OurFondren, bringing together all the neighborhoods of Fondren, in new and better ways. Its members, many of whom overlap with FRF and individual neighborhood associations, have inspired the creation of COPS, SoFo, the popular Fondren ladies auxiliary, and SAFE, the Security Association of Fondren, one of the first associations formed back in 1996. OurFondren has also organized an active code enforcement committee to maintain what should be minimal standards in Fondren. My hat’s off to OurFondren, FAB, and Fondren’s other neighborhood associations.

So, do we have as many civic organizations as Roseto?Â  Not quite, but we are not through yet in Fondren. We owe it to ourselves to learn about all of Fondren’s organizations, find the ones we are most at home with and become involved. And when we find needs that are not being met, we also owe it to ourselves to get busy and organize to meet them.Â  Then, perhaps, we can lead healthier lives…like the Rosetans.

Originally published in an FRF newsletter and then, the first issue of Find It in Fondrenâ„¢ last fall, this piece by Joe Wise is a perfect reminder of why we all will come together next Thursday night, January 12, for the Fondren Town Hall meeting at Woodland Hills Baptist Church.