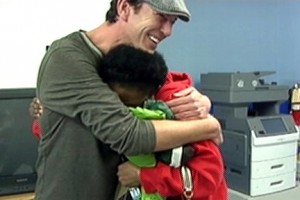 Eddie Outlaw with an overwhelmed recipient

Imagine standing in line, waiting to get your Christmas gifts out of lay-away and a stranger pays a large chunk of what you owe.

It’s a phenomenon that is sweeping the nation and is happening right here in the Jackson area. It all startedÂ Friday morning after a national news report was heard by a local woman.

It’s a testament to the power of social media and what a small group of motivated people can do to help others. Lay-away lines were long atÂ Wal-mart in Pearl but some unsuspecting customers got a breath-taking surprise Friday afternoon. A group of good Samaritans helped some get their holiday purchases. Was it divine intervention?

The cash came when some were at an all-time low and down on their luck. “Somebody just stole my debit card and used all my money,” said gift recipient Lakeisha McDonald.Â Others thought the worst when they were pulled from line. “I thought, oh no, this can’t be good. They’re going to tell us they lost our lay-away and then when I get back here, they told me they’re paying the balance of my lay-away and was just speechless. I couldn’t believe it. What a way to say ‘Merry Christmas,” said gift recipient Darla Eubanks.Â

Organizers say it all started early Friday morning with a news report of someone doing the same in Indiana. They say none of the people who pitched in are not wealthy and it goes to show a little can go along way.

“I sent a tweet out about it. I had about three or four people respond to me and it started the ball rolling. We were going to get together about a hundred dollars. ByÂ 3 p.m. this afternoon we had a thousand dollars. And so instead of helping one family we were able to helpÂ 10 families,” said organizer Lori Garrott.Â It is truly a Christmas miracle that came from small donations by a few people and made a huge impact. Organizers say they got such a good response today and Wal-Mart in Pearl has extended their lay-away deadline until Sunday. So they plan to continue the lay-away payoff tomorrow (Saturday).