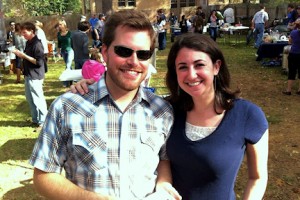 With a backyard perfect for gatherings, a Fondren couple has created what will soon become at least an annual tradition. Chris Myers and Rachel Jarman, who live in the Cherokee Heights subdivision in Fondren, held the first ever Backyard Barbecue Invitational on Saturday to a rousing success. “We have barbecues all the time”, Myers said, “and just wanted to make more of a game of it”. The event featured eight teams of two or three people, all from around Jackson, who served their own unique takes on chicken, turkey, pork and beef. Attendees were given samples and ballots and asked to judge on appearance, taste and tenderness.

Myers said he had wanted to enter the Beer and Bones competition that takes place every year in Jackson, but decided, for various reasons, not to and simply create his own contest.”I wanted looser rules”, he told us, as his fiance Jarman made an announcement for ballots to be turned in for the chicken portion of the sampling. Myers added that he has been a regular part of Arthur Jones’ backyard barbecues in Belhaven for quite some time, but once he and Jarman bought their house, they decided to try it out here. And, with a chuckle, he told us there was another motive for the day: “we were testing it (the backyard) out for our wedding”. The two plan to marry next April.

UPDATE: The winners are as follows:

and, for scoring the highest score in any of the three meat categories, Best in Show goes to Team Person-Hog for their excellent ribs