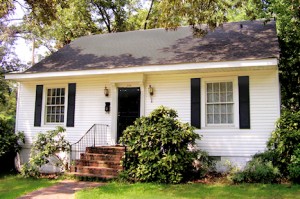 Since 2006, the Fondren Renaissance Foundation has been offering facade grants to live-in homeowners on the west side of North State Street through the Phoenix Initiative.Â  St. Dominic Health Services, Inc. has once again agreed to sponsor this important initiative, pledging $90,000 over a three-year period to this project provided that matching funds are obtained. The program has been sponsored for the past five years with a $250,000 commitment from St. Dominic.Â  To date, 56 homes have been completed under this original commitment.Â  At present, there are 20 applications on file for facade grants.

The average cost for a Phoenix Initiative Facade Grant is $6200. That is, the homeowner contributes $1200 to the cost and the remaining $5,000 is split between St. Dominic Health Systems and a contributor.Â  Making a difference while establishing community one house at a time: that’s the “rise” of the phoenix.