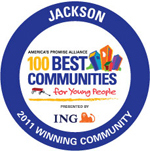 In a celebration of America’s young people and the communities most dedicated to helping local youth graduate from high school, America’s Promise Alliance has announced the 2011 list of 100 Best Communities for Young People presented by ING. Jackson makes that list. This is the first year the capital city has been recognized.Â  Jackson is committed to providing a solid education and venues for its young residents to get involved with civic work. Local partners work together to reduce dropout rates and ensure youth have a great learning environment. The Jackson Promise Coalition is working to improve local graduation rates and recently made strides by recruiting members and hosting a Drop Out Prevention Summit. Today, Jackson’s graduation rate is more than 60 percent. In addition, the Youth Leadership Jackson program provides sophomores and juniors an opportunity to learn group dynamics, public speaking, team building, decision making and leadership concepts.

To get young people involved in community civics, the Mayor’s Youth Council lets young people learn about the political system and city government. Overall, the city allocates more than $300 million in financial resources for youth programming. The Mayor also is directly involved by appointing high school students to be a part of the School Board Transition Team. The student’s role is to assess how effectively current policies address the needs of young people.

This year, more thanÂ 300 communities in all 50 states and Washington, D.C., were nominated for the competition. The winners come from 39 states. Twenty-two communities are nowÂ five-time winners and 29 communities are first-time recipients of the honor. They were chosen by a distinguishedÂ panel of judges that included some of the nation’s most well-known civic, business and nonprofit leaders.