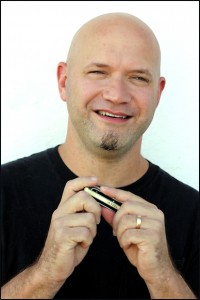 It was the best of times, and it was the worst of times. For Scott Albert Johnson, it’s a tale of one city that makes him the harp player in residence of Jackson’s hippest neighborhoodâ„¢. The St. Louis native says his decision to leave here was the best thing he could have done after graduating from St Andrews Episcopal School. A kicker for the football team, his foot lead him to Harvard where he played in bands like he had in high school. But when his bass got stolen, he stopped playing about twenty years ago. “I didn’t really appreciate music when I was up north because it wasn’t the same rich environment we have here”, he says. Nine years later, Johnson picked up the harmonica and ‘goofed around’, but realized ‘that was my real instrument’.

A Columbia graduate with a masters in journalism, Johnson switched gears and set about to become a musician. “It’s funny”, he says, “how you plan to do one thing and do something totally different”. With ‘no major game plan’, Johnson moved back to Jackson after visiting here for a couple of weeks at Christmas in 2002, another in a series of ‘good decisions’ for the then aspiring musician. Now, Johnson can be seen — and heard — playing all over, including Lithuania, Holland, New York, DC, and of course, all over the south. “I stay busy”, the 41 year old says. He’s currently in the studio working on a new album, “Going Somewhere” set for a spring 2012 release. Follow the progress at scottalbertjohnson.com.

Johnson says he and wife, photographer Susan Margaret Barrett, and their three kids, Charlie, Benjamin and Lily Margaret love Fondren. “We’re in the coolest neighborhood”, he says. “So many people here are creative or at least patrons of that world. We share the same interests and feel alive here”.