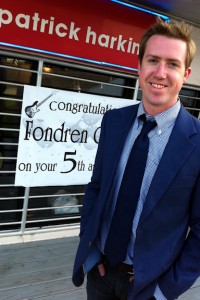 If someone had told Jackson native Patrick Harkins he’d be in Fondren with a vintage guitar shop celebrating five years -Â  just five years ago, his response would be “no way”. But that’s exactly the case this week as Fondren Guitars by Patrick Harkins strings up balloons and banners and polishes off a surprise cake from Harkin’s mom. “It feels like we started this six months ago”, he said this week from the front deck that doubles as a stage.Â  It was a stage dive of sorts that he made after moving back from Austin, Texas. Harkins finished college there with an entrepreneurial degree and worked in a vintage guitar shop.Â  He says scary, yes, but he’s happy about the decision.

From humble begins with one teacher to five instructors now, some with master’s degrees, lessons are a big part of the shop’s success story. And Harkins said some of those tales involve reluctant kids. “This one wanted a video game for Christmas and was upset with his mom for getting him a guitar instead”. Harkins told us this teen took lessons for years and is now a professional musician, touring with a band that plays national festivals. It gets better. One former employee is working with Electric Lady Studios in New York City and is currently in sessions with John Mayer and recently, the Beastie Boys. “They used this place as a stepping stone, and I’m thrilled.” Harkins says there are countless stories like these.

So is he living the dream? Harkins would say ‘definitely’. “It’s growing and getting bigger and better. I find myself thinking about this place all the time. I can’t imagine doing anything different”.

Stop in, and maybe grab a piece of cake before it’s gone. And make sure to say “Happy Anniversary to Patrick and everyone at Fondren Guitars.