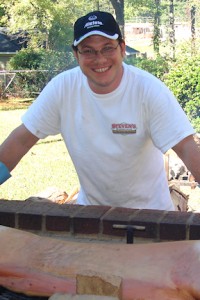 A true celebration of community will take place on Saturday in the top of Fondren and one Broadmeadow resident is making sure the barbecue is tasty to the last bite. Chris Crothers leads the charge in the pig roasting portion of this weekend’s Blocktoberfeast and for the first time in six years, he’s taking it easy — so to speak. “The first four years, my brother Scott and I led a small team in preparing side dishes as well as the pig”, Crothers tells us.Â “It was very labor intensive.” His band, the Church Keys, was also a big part of the event, but Crothers says being let off the hook is a relief. “Having only swine duties this year makes our work easier and less stressful so we can concentrate on preparing 180 lbs. of succulent pulled pork for a few hundred hungry people”.

The 40 year old Director of Communications at the Foundation for the Mid South says his love of the pig came six years ago when he and his brother began roasting a whole hog as a benefit for a neighborhood cause like Broadmeadow Methodist, the Privette School or the Broadmeadow Neighborhood Association. “We started off learning the holy grail of bar-b-que (whole hog) and practicing to see if we had any interest to compete in Memphis in May” he tells us. “Ultimately, with a great gazebo and a brick pit built specifically for whole hog barbecue only fifty yards from my front door, we decided to forgo the cost and hassle of competition and focus on fun instead.”

And when Blocktoberfeast and his fund raising efforts started to occur around the same time, both event’s crews decided to merge. “To ensure we could schedule one great big, successful event, we, along with Terry Neyland and her crew, put our heads and resources together and merged both parties”, he says.Â As a result, Crothers says the live music, monitored kids’ activities and bounce houses, great beer, and some of the best pork you will ever get is an undeniable unifier. “It builds community and engages neighbors”.Â  Blocktoberfeast is free with pork plates, beer and hotdogs for kids available at a nominal charge.

Crothers will be documenting the process on Facebook, posting photos and video throughout the roasting process.Â  Go to Facebook and “like” the Broadmeadow Neighborhood Association page and interact.Â  You can also visit Crother’s website at www.crothersbrothers.com to see photos and video and even snag a recipe or two.