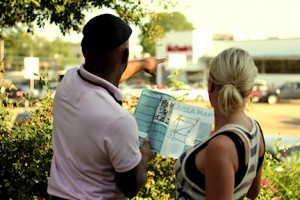 Mississippi is known as the hospitality state and in some circles, it may be a lost art form. But a Fondren shop owner says that hospitality moves mountains. Rodale Hall is the owner of Silly Billy’s Consignment Shop in the Duling School and says he has noticed a shift in our way of life. “I was away for many years, a military brat overseas, and when I came back”, he says, “something had changed”. A product of small town Prentiss, Mississippi, Hall says he specifically chose to locate in Fondren because of the wow factor that’s here. “Being a stranger to the area, I’m wowed by the little things”, he tells us. But that’s not something he thinks everyone can see. “You guys are like old family and sometimes it takes an outsider to appreciate what is here”.

Hall cites last spring’s Zippity Doo Dah weekend and the sheer number of ladies who, he believes, were grateful for the hospitable nature of the people here. “To a stranger, this is a big place”, Hall says, “and I never want anyone to feel like they’re lost”. To that end, he has walked down the block with customers searching for other consignment shops, like Orange Peel and the new Second Time Around and shown them the way. “I have no motives when I do that, but you know, it’s reciprocal”.

The advice then is simple: “sit on a bench sometime and watch people going by”, Hall suggests. “Speak to them. When you encounter strangers, show a little ‘may I help you’. Whether they buy anything or not, people should get that impression that Fondren is friendly”. Like most who note their favorite part of the neighborhood, Hall says Fondren is the people. And it’s that old way of life people who visit crave. “It’s the hospitality they miss. If we could fill that void, we would write our own ticket”.