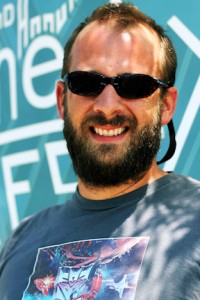 Call it a huge success.

An estimated crowd of more than 1,200 people enjoyed the 12-hour event and Knight says it went off without a hitch.

“I get chills thinking about”, he said. “I’ve only heard good things and have plans already for next year. I want this to be the next Jubilee Jam, to pull in national acts, maybe even block off all of Fondren for a whole day. At least that’s the goal.”

Knight praises the volunteer effort for pulling off the 2nd incarnation of the fest which last happened in 2009.

“We didn’t really open up the call beyond our inner circle of friends and regulars and still had nearly two dozen people,” he told us. “It was ridiculous how everyone pulled together to do something to highlight the arts and the neighborhood.”

Knight points out the efforts of Langston and Lisa Moore and gives special recognition to Woodland Hills Baptist Church. “They opened up that parking lot to us last minute and were awesome,” he says. “Christopher, their security and maintenance guy was pitching in, bringing out trash cans and tents and really, anything we needed.”

“There were 20 I couldn’t even fit in who wanted to be a part of Sneaky Fest,” Knight says. “I tried to to think of the flow of things with who to put on when and what the crowd might be like at a particular time of day.”

Sneaky Beans barista Caitlin McNally thinks her boss pulled it off splendidly. She says she was glad to see an event that appealed to so many. “Usually younger people can’t see the caliber of bands we had simply because they can’t get into age-restricted shows.”

She went on to say that she thought Knight has done a good job with his business in general because it is his passion. “Byron likes to see people happy and having fun and he offers a venue for that to happen”.