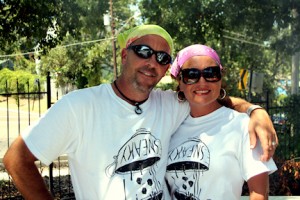 Almost a year ago, Sneaky Beans owner Byron Knight was asking how to pull off a music festival in Fondren, bigger than anything he had done before. About that same time, two champions for the city moved onto Ridgeway Street. Meet Langston and Lisa Moore. The couple had traded a life in the ‘burbs for a chance to be a part of a renaissance of sorts. And Knight’s music fest was intriguing to the pair. “Jackson needed a music event, what with Jubilee Jam being gone and all”, Langston said.”We needed something to showcase local talent”.

So for the last several months, the Moores have helped Knight to make Sneaky Fest a reality, especially in the area of logistics. “Everything form securing a kids zone to setting up stages and working with the city”, Langston says. “LOTS of logistics. And Sam’s Club runs”.

Langston says it doesn’t surprise him yet it does: people’s willingness to be involved. “We asked”, he says speaking of volunteers, ” and they came. And, you ask bands to play or sponsors to donate, and it’s come together”. Langston says he appreciates who we are as a people in the capital city and our willingness to pitch in. “Whether you know it or not, what you are doing is making Jackson better”.

Sneaky Fest continues until midnight in the lot across from Mimi’s in Fondren. Read about the festival lineup here.