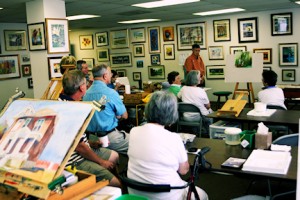 It’s no secret: finding a parking place can be an adventure in Fondren – especially at meal times or during special events. But there’s one group who says their founder came here from New Orleans for that very same reason. The Gaddis Group, named for the late artist John Gaddis, is said to have started when he couldn’t find a parking spot in New Orleans – and moved to Jackson. Gaddis began teaching watercolor in the capital city and, over many years, acquired a large group of students. Many of those artists stayed with him until 1992 when his failing health forced the closure of his studio. And that’s where the story might have ended.

But twenty five watercolorists who enjoyed the craft – and each other’s camaraderie -Â  formed the Gaddis Group in 1993. Member Eleanor Hughes said they’re all friends. And on the day we visited, they seemed like family. Their weekly sessions begin with a time for critiquing each other’s work. “When John got sick, he was closing”, group member Kenneth Primos said “and we thought we could learn from each other”. Member Kit Fields agrees. “We encourage each other and help to point out the flaws we can’t see on our own. It’s a learning process”. 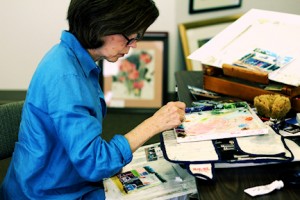 The group sells their finished works in their second floor studio in the Fondren Corner Building where many are on display on the first floor. The Gaddis Group studio is open to the public Wednesday – Friday 10am – 2pm. Members take turns opening the space, sometimes working on their own paintings while doing so. And while member Janie Davis tells us times have been tough (the economy, she said, has put a pinch on the art business), you can buy paintings from the group for as little as $15.