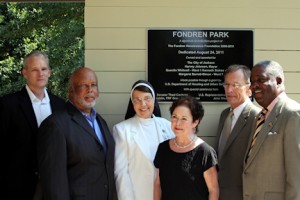 Fondren Park has a new owner – at least officially speaking. After a presentation made today by the Fondren Renaissance Foundation, the City of Jackson took back control of the half a million dollar park completed by FRF. The project was made possible through a grant from the U.S. Department of Housing and Urban Development. With Congressman Bennie Thompson, Mayor Harvey Johnson, Jr. and Councilwoman Margaret Barrett-Simon looking on, FRF executive director Jim Wilkirson made the presentation.Â  Also in attendance was FRF founding president J.T. Noblin, park architect John Weaver and St Dominic Health Services President Sister Mary Dorothea Sondgeroth, a champion of the Fondren neighborhood.

Mayor Johnson said Fondren was ‘thinking outside the box’ when it incorporated and embraced this area many years ago while Simon reminded attendees this was once “planned low income housing”. “Your ability to reach out and accept diversity”, the Mayor added, “is an example to the entire City.Â  Thank you for your foresight and vision”, he continued before adding “Fondren is still funky”. Congressman Thompson quoted scripture when he said “without vision, people perish”. As a then Hinds County Supervisor, he recalled Simon’s vision and ‘a meeting in Ms. Dyer’s living room’. “We talked and here we are.” The Congressman went on to say this should be the beginning of other endeavors here to bring the Jackson community back.

A cake replicating the layout of Fondren Park was served by Mitchell Moore, owner of Campbell’s Bakery, and dignitaries planted bulbs in the park’s new raised beds.

Fondren Park is at the corner of Dunbar and Northview west of State Street.