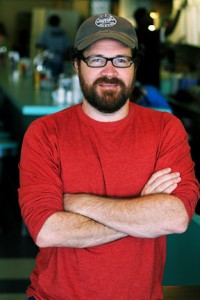 Jerel Levanway is a ghost. At least if he’s doing his job he is. The 38 year old film industry freelancer is the assistant location manager for Hollywood’s latest block buster, ‘The Help’, opening nationwide today. The tedious ‘behind the scenes’ details are what you see in the scenes and Levanway had a hand in making sure the process ran smoothly. “I spent hours in the City permit office”, he said, “doing ‘creative math.’” It’s those calculations that led to pieces of the film being left behind. “The businesses wanted the signs, and it really makes that part of Fondren look authentic.”

When the production came to town last fall, local ties, Levanway said, helped to set the stage. “Tate (Taylor) and Brunson (Green) – director and producer – are both from here and knew what they wanted”, he said. “The locations were spelled out in the book and we didn’t have to find a Brent’s”. But working with Fondren businesses to secure filming permissions could have been a challenge. “In some places, they’re having to pay off people to stop mowing their grass until filming is complete”, Levanway said. But not here. He told us Fondren businesses and residents — all of Mississippi really — was excited to be a part of the big screen magic. And last fall art director Curt Beech, whose credits include Transformers and The Social Network, echoed the same. “The ultimate compliment was to hear from those who remember the area from the 60â€²s”, Beech told us, “who said ‘this is exactly what I recall’. That is when we know we’ve done our job”.

Originally from Jackson, Levanway took a ‘long and winding road’ to get to today. From high school biology teacher to Swedish boat building school, even a stint in the healthcare field in Dallas, he notes his work with his dad as a trim carpenter likely prepared him for his current role. Replanted in Jackson by love (his wife is Nina Parikh, deputy director of the Mississippi Film Office), Levanway’s first major work was lead carpenter with art directing credits for Mississippi Public Broadcasting’s ‘Between The Lions’. He was production designer for the Yazoo City filmed and Sundance award-winning ‘Ballist’, a 2007 movie produced by Parikh. And more recently, Levanway has wrapped art and production worked with Toyota, University Health Care, Farm Bureau, and set design for World Wrestling Entertainment (WWE). He told us that art direction and production design provide the creative outlet he needs.

And that outlet could be wide open very soon. With the work of Parikh and film office director Ward Emling, Mississippi now has a tax rebate for filmmakers, making the state more attractive to future productions. Where does this put this neighborhood? Levanway said, firmly in the middle of huge potential. “This area could certainly see more screen time. With a soundstage in Canton and buildings here that maintain the period look, there’s no question, there’s built in production value waiting to be utilized in Fondren”.