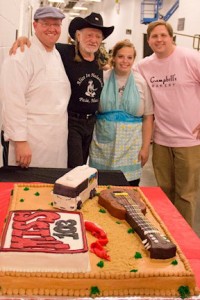 Earlier this month, country legend Willie Nelson played Jackson. We kept seeing Twitter and Facebook posts about a cake from Fondren’s own Campbell’s Bakery. We asked owner Mitchell Moore what it was all about and how it came to be…

Miss 103 is celebrating their 30 year anniversary all year long and the culmination was the Willie Nelson concert. They contacted us about giving away cake to first 1,000 people through the door (at the Jackson Convention Complex the night of the show.) Of course we said “yeah,” and in exchange, they’re doing ads for us. So they (Miss 103) said “we can’t guarantee it, but it’s a possibility that if you can also do a special cake for Willie, you can meet him and have your picture made with him.” We tried really hard to make sure it was a ‘Cake Boss’ type of cake, like the TLC reality show, ya know, heavy, everything edible, kind of 3D style. So we got there and they told us, after all that work, “it’s not going to happen.” So we thought, okay. But then Willie’s roadies saw the cake and said “that looks great.” They were trying to get Willie to see it and said “he’d love it.” As it went on, somehow, Robert (Lewis, part owner of Campbell’s) – I don’t know how he does what he does – got word to Willie’s head of security. He said “yeah, Willie’s coming through about 8pm. If you’re back there, maybe he will take a picture and you can meet him and show him the cake.”

So we got escorted back. And Willie’s son came came through and loved the cake, then his daughter came through. She LOVED the cake, She took pictures of it and was all about it. Willie came around the corner, and his daughter said “did you see the cake, daddy?” And he was like, just wow, really great, really sincere, and he says, “did ya’ll get a picture?” He puts his arm around me and Josie (Monk), and we took a picture. We took his guitar made of cake, and sent it backstage for him and his crew. What a great guy, really easy going.