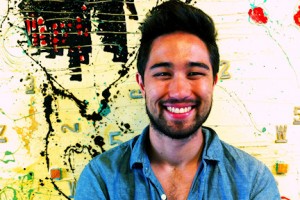 When singer-songwriter Cary Hudson rolled into town this past weekend for a post rehearsal dinner concert at Duling Hall, he mentioned a friend from California may want to stop by. It turns out, the friendship was a new one – just seven hours old. And his new acquaintance arrived in Jackson only after a chance meeting with Hudson in a Hattiesburg diner earlier in the day. It seemed the musician felt comfortable with his buddy, enough so to introduce him to us. Meet 23 year old Koji Frahm.

When we talked to the Palo Alto native, we discovered he was already well versed in Fondren. “I’m at Cups,” he said in a phone call to give him directions to Duling Hall. And that’s not all we learned. The liberal arts graduate told us he was on his way to New York City – with no particular route or schedule. “I’ve spent the last five days in New Orleans and I’ve eaten alot of crawfish and poboys,” he said. “Then I toured the coast and asked where I should go next.” After an overnight stop in a Wiggins campground, Frahm made his way north, where his encounter with Hudson led him to the capital city. “You know, he seemed like a really nice, down to earth guy, and so we hit it off,” Hudson said later in the evening. And with no planned place to lay his head that night, Hudson invited him to stay where he was staying with a friend in Belhaven. Frahm says that’s how he has made his way east. “Have you heard of couch surfing,” he asked? Frahm says the “travel on a budget” method of overnight accommodations has turned out great for him. “I’m meeting some really nice people.”

Frahm worked for the last year in in Austin restaurant, a field far from his degree, and says it’s now on to something else. “New York is my north star.” Frahm says he’ll stay there for a while, but then move on, saying at his age, now is the time. “If you put your feet down,” he noted, “they’ll reach up and grab you.” Frahm is intent on exploring life, but says it does have its tradeoffs. “It’s hard to establish dating relationships when you know you’ll be gone soon, but really, I have no regrets.” And it’s this ‘no looking back’ attitude that leads Frahm to memorable places – like Fondren. “I’ve only been here for a day but I already see that this little area has a sense about it, like people here care about each other and their community.” The traveler experienced an Aladdin dinner, complete with belly dancers, and late night burgers and beer at Brent’s Soda Fountain on Friday. After a brief stop in circa. URBAN ARTISAN LIVING early Saturday, Frahm was on his way to Memphis. “What’s good to eat there,” he asked?Â  May we recommend the barbecue?