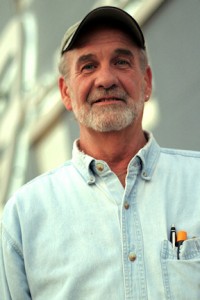 Before and after: it’s his favorite part of the job. Don Egdorf is the Upper Ninth Ward New Orleans native who says his own apartment is living proof of his “work as a hobby” mentality. The 57 year old serves as building superintendent for Peters Development Corporation, overseeing nearly a dozen properties, four of those in Fondren. Spending his junior high years at Gulf Coast Military Academy, Egdorf says he was misunderstood. “I was bored,” he tells us, “and got labeled as falling behind. Today, they’d put me in the gifted class.” And they certainly couldn’t call him bored anymore. His busy job is making sure everything gets done. It’s also his biggest challenge. “Coordinating people,” he says, “can be tricky.”

But it is a remodel that gets his juices flowing. Like his basement apartment in Fondren Corner. With built in fish tanks, a hot tub, and a maze of rooms, Egdorf is always hard at work on the ‘next project.’ He called it a ‘useless warehouse’ before, but now dares to call it ‘one of the nicest apartments in Fondren.’ When Egdorf is not building or coordinating, he’s spending time with the people he loves – like his kids, and complete strangers. “I walk up to people in Rooster’s or Basil’s,” he says, “and just start a conversation. You can do that here. It’s different than anywhere else in Jackson.”