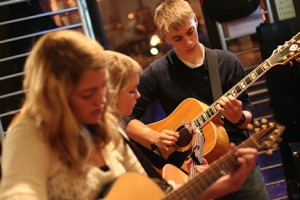 Pull up a chair. You have a front row seat for the next big thing, right here in Fondren. For a town that boasts of its rich musical history, the future looks promising, too. Local musicians, bloggers and instructors agree: these kids can shred! And they have plenty of places to hone their craft or enjoy the craftiness of others. Where the majority of clubs and bars say “no” to patrons under 21, every venue in Fondren is all ages. And there are quite a few. From outdoor patios to back lot stages, the Jackson musical scene is blossoming in this hip little ‘hood.

Over 100 students take lessons at the neighborhood music shop, Fondren Guitars. Teachers there say parents are coming to them surprised at the growth of their young talents. And the growth extends beyond the bedroom walls. Moms and dads alike say their kids are getting to know other players and forming their own bands — just like the 50’s and 60’s when every garage was filled with amps and walls covered in egg cartons. And they’re not emulating the iPod stars of today. No, their repertoire dips back to the days of Zepplin and Hendrix. But then again, a bit of Modest Mouse or Radiohead never hurt the musical playlist one bit.

In that vein, Fondren Guitars has instituted a program, Rock Band, that pairs the cream of the crop with other budding musicians, to form bands that gain exposure on levels they may not get otherwise. The annual Arts, Eats, and Beats Spring Fest and Fondren Unwrapped feature regional acts on many stages, but at Fondren Guitars, Rock Band participants are the stars. And they get a little time to shine on the small screen, too, appearing on the local Fox affiliate’s morning show earlier this year. And that’s just the beginning. 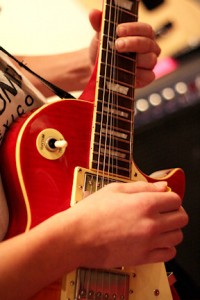 There are plans for long-term growth, sending these students out with guidance and direction, but allowing them to direct their own musical journeys. From band name to song selection, there’s no battle here for creative control. Take that, music industry. And take that to the bank. Their guitar, bass, piano, and drum teachers say, to see these kids as good as they are now, the sky’s the limit. And it’s not just the players. Some may not be gifted with an instrument, but are unique artists in their own right, as songwriters or designers — something the music industry needs more of. Fondren Guitars gives them the ability to chart their own course.Â  The shop says they’re helping to put something out there that’s different. And we like the sound of that. Rock on, kiddos, rock on.