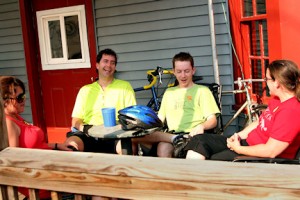 When Wade Grant talks about using his bicycle as transportation, he’s serious. For him, it’s not just a ride to the corner store: it’s a 10+ mile three time a week commute from Clinton to Lakeland Drive that has him cycling. On Friday, Grant, along with fellow Jackson Bike Advocate board members, met at Sneaky Beans Coffee Shop to celebrate national “Bike to Work” day. He joined Ryder Taff, Whitney Grant (no relation) and Bike Walk Mississippi executive director Melody Moody for a drink and a discussion about biking with Find It In Fondrenâ„¢…

FIIF: What is National Bike to Work Day all about?
Moody: It was started by the League of American bicyclists to encourage people to commute to work. National statistics say most people in cities are from 1-3 miles miles from their place of employment. If you live that close, bike to work day gives you the chance to save some gas money, get some exercise and at least try it out. It’s an opportunity for people who don’t normally think of riding a bike to work to do so. And, many who try it for the first time on this day end up commuting more as a result.

FIIF: Is there a regular opportunity beyond bike to work day to get people interested in cycling?
Taff: The Jackson Bike Advocates sponsor a community bike ride the last Friday of every month. We meet in the parking lot of Rainbow about 6pm and ride out at 6:30pm. It’s a slow pace, just getting people out and getting them comfortable on different routes. We come back (to Rainbow) and we grab dinner and drinks somewhere in Fondren.
Wade Grant: Yeah, the main idea is just to get people out and show them how to behave in traffic. It’s kind of a chain reaction, getting over that initial intimidation. Jackson is probably one of the most bike friendly places I’ve ever ridden. Downtown drivers especially waving you on, letting you have the right of way. Jackson has the potential to really thrive and grow.

FIIF: Do you see Fondren as a bike friendly neighborhood?
Moody: Oh definitely. There are the bike lanes on Old Canton, and with everything being in such proximity (the homes and businesses), it’s a great place to ride. And, with this $2.6 million grant coming Fondren’s way to improve sidewalks, landscape, and lighting, I can only see it going up. But what we really need to look at is making the West side more bike and pedestrian friendly, and making it easier to not only bike IN Fondren, but TO Fondren.
Wade Grant: It shouldn’t be an island. The more accessible you can make it, the better. I’d love to see riders from Ridgeland biking to Fondren. We want to see it more friendly and less opposing to get here. There are so many neat shops and places to eat.

FIIF: And Whitney, you are more behind the scenes, right?
Whitney Grant: Right. Not so much of an avid biker but working on the things Wade talked about. Melody (Moody) and I go after grants to make neighborhoods more cycle friendly. I’m looking at infrastructure and public policy and going to meetings with MDOT to make sure the voice of the biker is heard.

FIIF: There are so many obvious benefits to biking. How have you all seen it benefit you?
Taff: I think cycling makes for a stronger community. You stop, you talk to people, you are more prone to get off the bike and shop. In a car, you’re so insulated. You just notice the world around you more.
Wade Grant: And the health benefits for me: I sleep better, I’m not as restless as I once was. Some people even say I’m more hyper if I don’t ride. It’s an outlet to release some energy! I save gas money and usually put it back into my bike. But, I DO have more money to spend on shopping and dining out and such.
Moody: And I see it benefiting our community as a whole. As advocates for biking, we see it being used to fight obesity, to bring economic development, and to help the environment. It’s proven that biking does help the community infrastructure. And the transportation aspect: whether it’s using a bike to commute by choice or as a way to get around due to socioeconomic conditions, we’re working to make an environment more conducive to that. This bicycle really does bring people together across diverse lines. Cycling gives a community to those who choose to be on a bike.

To learn more about The Jackson Bike Advocates…