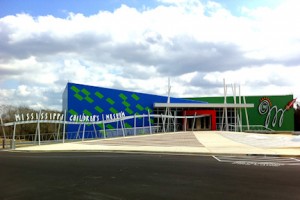 In Fondren, we are nothing if not welcoming and hospitable.

And so, we tip our hats and extend a handshake – or fist bump to our friends just beyond the lines. While we like to think of ourselves as a “city within a city,” our accessibility to arts, recreation, education, and culture that lies within arm’s reach and make this THE best spot to be in Jackson.

Just outside the easternmost boundary of Fondren, LeFleur’s Bluff and Mayes Lake provides a lush green spot in the heart of urban Jackson. In addition to camping, fishing, picnic spots, and nature trails, the 305-acre park features a nine-hole golf course and a driving range. The park is named for Louis LeFleur, a French Canadian explorer who established a trading post on the banks of the Pearl River in the late 1700s. The site is also home to the Mississippi Natural Science Museum and showcases a brand new Mississippi Children’s Museum. This treasure focuses on literacy and health and is fun for kids of all ages. Across Lakeland Drive to the north is the Mississippi Agriculture and Forestry Museum, the Mississippi Sports Hall of Fame and Smith-Wills Stadium.

To the south is Greater Belhaven. The area’s two neighborhoods – Belhaven and Belhaven Heights – are a trip back to a slower time. Greater Belhaven remains one of the most historically intact neighborhoods in the country, stretching from High Street to Woodrow Wilson and from Congress Street to I-55. Home to Belhaven University, founded in the Presbyterian tradition, and to Millsaps College, a Methodist liberal arts school, Belhaven also is the neighborhood where you’ll find several historically significant homes.

Pulitzer prize author Eudora Welty lived here and wrote from her 1924 built home, listed on the National Register of Historic Places. The Manship House, a Gothic Revival cottage on Fortification Street, served as the home to Charles H. Manship, Civil War mayor of Jackson, and his family. And there’s the Boyd House, also known as The Oaks, located on North Jefferson Street. Built around 1856, it was a residence of businessman and long-time mayor James H. Boyd both before and after the Civil War, as well as future generations of his family for over 100 years.

The Belhaven neighborhood also hosts its annual Bright Lights, Belhaven Nights Festival, a favorite for families from all around, in August. And, New Stage Theatre, Mississippi’s only professional theater, is located in the heart of Greater Belhaven. At New Stage you can attend everything from Shakespeare and Broadway musicals, to independent films, edgy late-night comedy acts, and newly discovered plays funded through the Eudora Welty New Plays Series. As one of the South’s oldest theatres, an exciting line up is offered year-round.