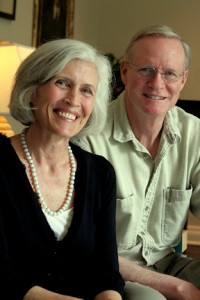 What’s the best way to know Joe and Chuck Wise? Ask them about their community. The husband and wife pair are Broadmeadow residents whose champion efforts are in large part responsible for the revival of the ‘Top of Fondren.’ And if you visit with them long enough, you have to bring them back to the topic of themselves — because they instead shine a light on the people around them. Joe is a commercial ligation attorney and was the first ever North Fondren Renaissance President. Chuck is an advocate for children whose passion is education, a love she utilized working with youth conservation efforts under the U.S. Park Service. Both have put those skills to work reclaiming a neighborhood they say, is crucial to Jackson. “We saw the stats years ago,” Joe says, “and decided this is the capital city and we will not discard it.”

The pair spend time in Perdido Beach, Alabama as often as they can at Chuck’s grandparent’s old home place. And with the ‘beach people.’ “We’d be there all the time if it weren’t for Fondren,” Joe tells us. Armed with a camera and a bass guitar (a more recent passion for Joe), the two dote on each other and speak lovingly of the other’s accomplishments. Until they change the topic — back to Broadmeadow and its hard working people. “We moved here in ’86 with our kids,” Chuck tells us, “for a larger home and a garden space. What we have found is a neighborhood that is thriving and growing. We see the change. We’re all pulling together.”