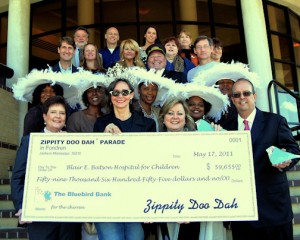 In what is being touted as a “classic example of synergy,” the Zippity Doo Dah weekend two months ago has raised $59,655 for Blair E. Batson Children’s Hospital in Fondren. In a presentation made on Tuesday, Sweet Potato Queen Jill Conner-Browne handed over the monies to Batson’s Chief Nursing Officer Terri Gillespie. Sal and Mookie’s co-owner Jeff Good, whose annual carnival was a big part of fundraising efforts, said this was a “power of a partnership” with many players. Good’s often uttered mantra “working together works” was echoed by Fondren Renaissance Foundation consultant Jim Wilkirson and Fondren Association of Business President David Waugh whose organizations played major roles in leadership and organization. Also cited was the work of Conner-Browne’s Wingfield Class of ’70 ‘Classymates,’ who alone raised $20,000. Conner-Browne went on to say the weekend was a great example of pursuing ideas and bringing others together. “This grew beyond our wildest expectations,” she said, “and we hope to see it continue to grow over the years.” Batson’s Gillespie had one word for the presentation: “speechless.”