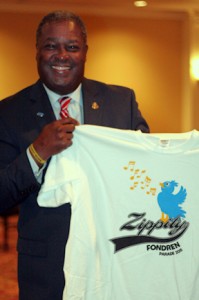 Jackson Mayor Harvey Johnson was full of praise for the people of Fondren at tonight’s meeting of the Fondren Association of Businesses. The group met at Fondren Hall – the former Primos in North Fondren – where Johnson was the guest of honor and spoke at length to laud the neighborhood. “If ever there was a model for the rest of Jackson, the rest of the nation even to go by, Fondren is it” the Mayor said to a group of about 75. He referenced Fondren Park (“who would have thought a few years ago this was possible”) and the Jamileh brothers who are helping to transform the Meadowbrook at State Street area. Johnson said they’re helping people to know the district extends to Northside Drive. “This is not an event but a process,” the Mayor added, “and look what you all have achieved in these few years. Johnson went on to say whether it’s a cup of java, a plate of tapas, or a guitar lesson, Fondren is moving quickly forward.

Mayor Johnson went on to call Jackson a ‘destination city,’ saying millions in annual revenue comes from tourist dollars. “Fondren carries us a great distance in that direction,” he said. A planned University Medical corridor was mentioned for Woodrow Wilson from I-55 to I-220, an integral part, the Mayor said, of Fondren and of Jackson.Â  And the mayor listed a host of upcoming projects including striping for the recently paved State Street, more paving from Senecca to Northside (“we haven’t forgotten you”), and $2,000,000 in lighting, landscape and sidewalk improvements for the central business district.Â  Mayor Johnson also took time to thank Precinct Four Commander Watts and his officers, noting crime stats for Jackson that have decreased.Â  “Violent crime is down by 5%,” the Mayor said, “and property crime is down 23%. It’s the good neighbors of Fondren who look out for each other. I can’t think of another group that has been more active in working with police.”

Several resources were mentioned that are helpful to our neighborhood. Those include the monthly COPS meeting (every 4th Thursday at Redeemer Church), the City’s new 311 system to ‘lodge concerns and report issues,’ and a special judicial process for handling unkept property and abandoned houses. “We want you to call,” Johnson said. The Mayor closed his remarks by adding more kudos to Fondren. “I brag on you everywhere I go. You can see and feel what is going on every time you drive or walk through this area.” FAB President David Waugh also offered encouraging words to the group by saying “we’re working together. Let’s join hands to build and rebuild Jackson.”