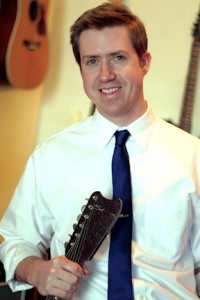 Peak into the windows to see the vintage guitars. Looking out of those windows is a man who wants to see his community grow. He’s 29 year old Patrick Harkins, the owner of Fondren Guitars, in business here for nearly five years. The Jackson native who graduated from St. Edwards College in Austin, Texas, says he’s passionate about the little community he has chosen to do business in. “If I couldn’t be in Fondren, I don’t know that I’d be in business anywhere else,” he says. Harkins has been playing guitar since the age of 13 and says he’s always known he’d do something professionally in music. After graduating with an entrepreneurial business degree, he moved back to Mississippi and opened his store. Harkins says Fondren Guitars has grown from he and one part timer to a full staff of employees who make their homes here and hang out here. “It’s great,” he says, “to watch our music community blossom.”

And growth is something Harkins says he hopes he can be a part of for years to come. “Fondren is the coolest place in Jackson,” he tells us, with “the right feel and the right people. I hope I can bring my passion to the table in some sort of community leadership role in the future.” Harkins is married to his high school sweetheart, Haley, and they have a son, Hank, who “will be the next owner of Fondren Guitars.”