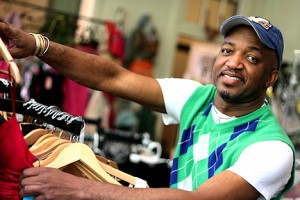 Rodale Hall is not afraid to say he wears second hand clothing. As a matter of fact, the Prentiss native was always named best dressed in his high school years, clothed in 25 cent khakis and 10 cent shirts. Hall takes his love of thrift shopping back to school — the Duling School — with Silly Billy’s, a new consignment store for fashion and accessories. The 42 year old enters his third week of business on Duling Avenue in Fondren, and says great things can be found if you treasure hunt.

Consignment retail is not a new venture for Hall, who tried two years ago with a Terry Road store, but says that location was “a lesson.” With partners Vacita “VJ” Jones, “the handbag mistress of Duling,” and behind-the-scenes Randy McDonald, the trio hopes to help families just like the one Hall came from. “Second hand has always been a blessing to families,” he says, “who could not afford but wanted nice things. Coming from a home with a single parent, I could take $20 and turn it into a wardrobe.” He says it was helpful, too, to have a grandmother who worked for a dry cleaner in his hometown. “You can’t tell the difference in new and dry cleaned khakis.”

When asked about his choice of Fondren to begin again, Hall, who lived overseas much of his life as a “military brat” says it reminds him of those towns where he grew up. “They all had little areas where you could shop, eat, and hang out,” he says, “and that’s what I’ve found here. Being a stranger to the area, I see the little things that maybe Fondrenites take for granted.” Hall compares the neighborhood to your favorite pair of shoes. “You may feel it’s an old shoe, but to others, it may impress and wow. Fondren is an old shoe that always fits if it’s worn well.”

For tomorrow night’s Arts, Eats & Beats, Hall says his store will follow the night’s ‘golden egg-stravaganza’ theme with hidden surprises and a ‘follow the beat’ parade. “If you hear the familiar songs,” he says, “lead the parade, show us the dance of the day, and let’s have a blast.”