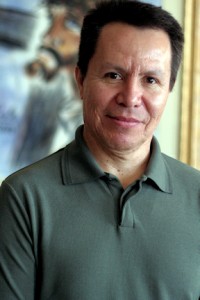 It was a preseason NFL game in Chicago that brought him to the United States in 1986. And Victor Hernandez says it’s God who brings his smile to Fondren. Hernandez says he stayed in Chicago after that Dolphins-Bears matchup for “better opportunity.” He spent late nights building his first computer for $50 (almost to the detriment of his marriage, he says with a chuckle) while going to school and making deliveries during the day. Hernandez says he knows Chicago like the back of his hand.

When his brother’s job for Borden took him from the windy city to Mississippi, Hernandez followed. And when that same job moved to Texas, the pair began a remodeling business here. Now the husband and father of three teens is the superintendent for St. Luke’s United Methodist Church. The 45 year old Mexico City native credits church member Fran Jones for helping him to find work at St. Luke’s, but his background is in computers. Hernandez says the church had one we he came on board in 1999, but now they all use them.

Asked why he always keeps the smile on his face, he emotionally tells of his mother in Texas. “I treat everyone as I would treat her,” he says, adding, “I love the people here.” Hernandez says another part of his job includes keeping a watchful eye. “I know everybody,” he says, “and this is my second home. I have to keep everyone safe.”