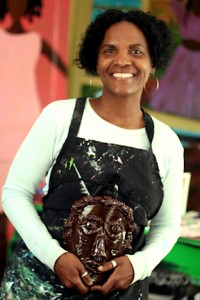 Listen to painter and sculptor Roz Roy speak. You hear the excitement in her voice. Look at her walls and you see her pain.

The 50 year old who majored in commercial art design but never finished at Jackson State said it was her father’s and brother’s deaths that inspired her to take up her art form. Now, she is inspiring kids from all over the metro with summer art camps and weekly sessions at Boyd Elementary School.

Roy said it is a grant secured for her by the Fondren Renaissance Foundation that allows her “artist-in-residence” time at Boyd where she sees herself in the kids she instructs. “I was that little girl,” she told us, “with scribble-scrabble on the tops of my papers, the one who couldn’t sit still. My mother kept me in scouts and coloring books – anything to encourage my creativity.

But it wasn’t until 2003 when her father passed that she began painting. “I always liked art, but after my dad died, I said, ‘Girl, you gotta do something!’”

And so she picked up a brush after the persistence of the International Organization on Artists and Disabilities (VSA). Roy, who contracted polio from a bad vaccine in 1961, said, had it not been for former director Leslie Scott, her talents would not have been fostered. Roy began attending VSA sessions where she connected with summer classes at Tougaloo and another talent was discovered: working with clay. “I have fast hands,” she said, “and felt encouraged by my teachers.”

That’s a far cry from her college days where she said she felt criticized in her efforts. Roy said she was self conscious, and that stayed with her. Working with kids at Boyd, and then, this summer in her camps, Roy said she understands.

She knows children are scorned in some homes. Broken families are rampant, and, through tears, she said “this is my dream. I am so full, going to the schools, to see these kids.” Roy adds, “the end result is that art works.”

And for her, art is therapy. A member of the Mississippi Artists’ Roster and the Mississippi Craftsmen’s Guild, Roy said she can’t explain what she does, but that it is symbolic in many ways. “When you see yellow, that’s a cleansing process. I figure things out when I paint. It all comes from the inside.”

Roy is pouring it out this June with kid’s paper collage and finger painting classes at her Fondren studio and clay sessions at the Craft Center in Ridgeland. Supplies and snacks will be included, and volunteers have been coming forward, she said, to help out. While actual dates have not been set, Roy said more information is available by calling her at 601-954-2147, emailing heavenlydesignbyroz@yahoo.com, or by finding her on Facebook.