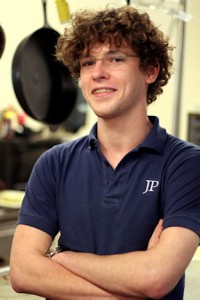 He’s experienced kitchen prep in Chicago’s Tru Restaurant under Executive Chef Anthony Martin, a James Beard nominee. Just last weekend, he was in the Viking kitchen under Chris Hastings, owner and executive chef of Hot and Hot Fish Club of Birmingham. Tomorrow night, he brings his talents to the St. James Episcopal Church kitchen in Fondren. Oh, and he’s only 16. Meet Arden Barnett, Jr., a Jackson high school student who is on his way to being an award winning chef in his own right. His father, Arden, Sr. says he was chopping rosemary at five and wowing Mangia Bene executive chef Dan Blumenthal. But Arden, Jr. says it was three years ago when he began to see the kitchen as a place he feels comfortable expressing himself. “You can create there,” says the young culinary artist, “and whatever you can think of, translate it into food.”

While Friday night’s menu may be more familiar (whole roasted chicken, sauteed haricot verts, garlic potatoes and more), Barnett says he loves the little known (at least here) French cooking style of Sou-Vide. A low temperature, vacuumed water bath method, Sou-Vide, Barnett says, makes food really tender and it’s “interesting to see how it turns out.” Especially when he gets his favorite herbs like rosemary and basil involved. He’s adventurous, his dad says, both in the kitchen and at the table. “Arden’s always been an eater that tries anything,” the elder Barnett says, “and has been fortunate to travel extensively around the world.” On a more recent culinary trip to California, Barnett enjoyed chefs Gary Danko and Thomas Keller, and even brought back some of their recipes to try. “That was an asparagus and red pepper salad,” he said, referring to a dish he served at a recent Ramey Agency rooftop party.

Barnett gets it honestly. His great grandfather was Angelo “Pops” Primos, an immigrant from Greece that started one of Jackson’s most famous restaurants. And he says he is following in those footsteps. He plans a trip this fall to the Culinary Institute of America to explore “probably the best place to go for cooking school.” In the meantime, you can catch Barnett and say you ‘knew him when,’ this Friday night prior to the Love to Be Loved Concert with Pierre Bensusan at St. James in Fondren. Dinner tickets are $12, and all proceeds go to community outreach projects of the church.