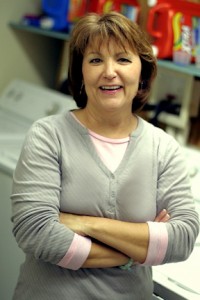 Some said she didn’t belong. “I’m just a a country girl,” says Sue Cowart, owner of Empty Hamper, a full service ‘wash-dry-fold’ laundry in Fondren Corner. She is talking of former coworkers and even her closest friends who cautioned her before bringing her nine year old business to the eclectic neighborhood of Fondren. Formerly a medical lab tech for 23 years, this ‘people person’ says she got burnt out and bogged down in paperwork. “I couldn’t believe how nice I was after I left that field,” she says with a chuckle.” And nice doesn’t even begin to describe it. Ms. Sue, as her regulars know her, calls her customers ‘family’ and says even those who used her in original Clinton location still drive over to have their laundry done.

But why laundry as a career path? Cowart says everyone complains about it, and she enjoys helping people. Much like her mother who worked for Delta State University in their laundry for 27 years. Cowart says she thought her customer base would be singles or college students, but has found families with kids and soccer practices to be her customers since day one. She says she’s seen the children grow up – through changing clothing sizes. “Husbands thank me,” she says, “because their wives aren’t doing laundry all weekend.” No, it’s Cowart and her three part time employees who take care of it and who serve a diverse, accepting community. Though she may feel out of place among the young creative class that lives and works here, she’s not. “I don’t have that artistic flair,” she tells us, “but I still fit in. Everyone does and that’s what I love about Fondren.” And while Cowart loves her job, it’s not about the laundry. She emphatically says she hates doing her own but doesn’t mind doing it for others. “I do what I do for the people, and that means a lot.”