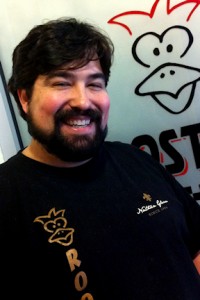 Just ask Nathan Glenn, the owner of Rooster’s and Basil’s in Fondren.

The restaurateur, who had a hand in his mother’s Congress Street Bar & Grill and Fondren’s Auditorium, says he has refocused and reenergized and fallen back in love with his first love again. That is evident in a new Rooster’s menu, new decor, and a new creative flair.

The 35-year-old says he’s let go of some other areas and decided to get back to Fondren, a plan which has helped his nighttime business increase, he says, by 30-40%.

The dining room of Rooster’s has seen some improvements from the presentation of food to the new art by William Goodman and Jason Lott. “We just wanted to get back to basics,” Glenn told us. “People knowÂ great products and great value and they’ve seen too much flash and wow without the quality to back it up.”

Rooster’s began on Roach and Capitol Streets 26 years ago, and Glenn says the restaurant has been “doing burgers since before burgers were cool.”

But the push doesn’t stop with Rooster’s. Glenn is making his way through the Fondren Corner lobby, making it a more inviting dining space at night and possibly bringing in some live music. And within six months, he tells us Basil’s will open in the evenings with an Italian pizzeria theme. Working with artisan baker Matthew Puckett, Glenn is developing a crust, he says, has never been seen in Jackson. That crust will be made in a bakery that is located in Basil’s to give it more space and bring it out into the open.

Glenn, a South Jackson native, says he loves the growth Fondren has seen in the seven years since he has been here. He rattles off a list of what he calls the “top restaurateurs around” – Walker’s, Nick’s, Babalu, Sal & Mookie’s — and points to the growth of what is still to come.

Connecting with Fondren Renaissance and Mike Peters, he told us, is what helped him to establish his place in the neighborhood. “It’s been a hell of a ride, living and working here,” he said, “and seeing all of the growth and creative people who have come here.”

Glenn says he can sum up his success with two words: hard work. “Be honest and learn from your mistakes.”