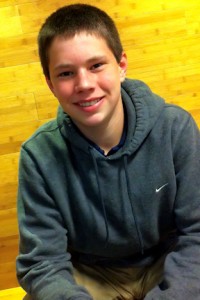 Ask most 13 year olds what they are listening to on their iPod or what they are doing in their free time. The answers are always the same – unless you talk to Gabriel Escude. The guitar playing 8th grader is a Zeppelin and Clapton fan – and he’s a distance runner. Seems odd until you spend some time with the soft spoken yet excited teen and realize he’s not like most 13 year olds. “I want to be a Navy Seal,” he said on Friday, “because it seems like it would be a challenge.” While that may be years away, Escude is working on a more immediate goal: breaking the Mississippi state record for a 13 year old half marathon runner. Currently held by Garrett Hansen of Belden, Escude is shooting for the under 1:50 mark at January’s Mississippi Blues Marathon and Half Marathon, a race he’s been training for since early fall. The 13 year old has been running since 6th grade in his school’s running club, but has been a part of the school’s cross country team for two years.

Escude says there are tradeoffs, like less time with his friends on run days (he currently runs 25-30 miles a week), but that he is determined to meet his goals. Having been the youngest competitor by four years in last summer’s Heatwave Triathlon, the teen hopes to ultimately run a full marathon in under three hours. Escude says he wants to prove to himself that perseverance pays offÂ  and that there is something to be said for committing yourself to a goal. “You can push your body,” he adds, ” to do anything you put your mind to.” That’s not going to be too hard for him say parents Craig and Michele Escude. “We’re quite impressed. Whatever he sets out to do,” his mother says, “he goes at it 300%.” And his father echoes the sentiments with pride. “He amazes me. Gabriel has more determination in his little finger than I have in my whole body. We’re very impressed, more so everyday.”