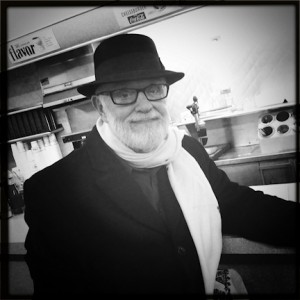 When Richard Sneed walked into Brent’s last week in Fondren, he just stopped and glanced around. When asked if he needed assistance, his reply was simple: I’m just reminiscing. The 67 year old world traveler said he’d been on many journeys, but this short trip was for a return to his old stomping grounds. Sneed was remembering his days as a ‘soda jerk’ here – over 50 years ago. The man, who lived in New Orleans for some 30 years, is back in the capital city again, living not far from where he grew up and where he worked as a high school student. “I went to Duling, Bailey, Murrah, and then Millsaps,” he said, as he recounted the history of his youth. That past included afternoons working for the Jitney before moving next door to Brent’s, a place he says has changed alot since his time. Cameras, cosmetics and cigarettes were available, and so many gifts. Sneed said many would call ahead and order gifts, having them delivered to their homes. He also spoke fondly of his former Brent’s coworkers – namely Mr. Brent, Doc Noble, and a couple of characters named Edna and Fish. “I could tell you some stories,” he said with a chuckle.

Sneed said Brent’s was a part of the culture here in this area of town. “People couldn’t make it one day without coming by for their cherry coke, coffee or milkshake,” he told us, “and this place was always packed after school.” And while there was no grill in that day, some of the store’s most popular items are still on the menu – like Brent’s pimento cheese. When asked what he remembered most about his time working for this Fondren institution, he smiled, and quickly said ‘the people.’ “I wonder what ever became of them and what they’re up to these days.” So, if you stop in Brent’s and see a seasoned gentleman sitting at the counter looking around with wonder in his eyes, it just might be Richard Sneed. And I’m sure, if you ask, he’ll invite you along for a journey of your own.