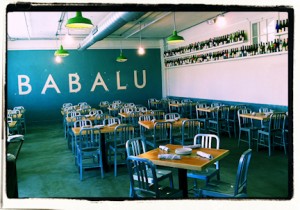 I was thrilled to receive an invitation to be a part of the “Friends and Family Night” at Babalu Tacos and Tapas earlier this week in Fondren. I’ve been anxiously awaiting the opening of the neighborhood’s newest eatery since hearing rumors almost five months ago. Braving tornado warnings and slippery asphalt, I sped from downtown, through the waterworks curve and whipped into the Duling School parking lot at seven on the dot.

When I walked into the space located on the east end of the recently renovated Duling School, I was greeted by familiar faces, infectious Latin music and none other than Lucille Ball. The idea of projecting episodes of ‘I Love Lucy’ onto a blank wall is brilliant, and it helps set the mood for what is sure to be a light-hearted dining adventure. Joan Bailey told me this was home to two first grade classes and the cafeteria. “I was there through sixth grade,” she recalled happily.

“We had been looking at different casual, funky, retro style concepts around the country and wanted to do something similar in Jackson,” said owner Bill Latham. “The school building space had the exact industrial feel we were looking for and, in addition, a great spot for outdoor dining. I found out later that my wife, Betsy, went to first grade in the same space.” All signs of the academic history have been erased though, and what you get is a large open space that is a crisp white with accents of ocean-glass green. The free-standing bar has room for plenty and is decorated with promotional poster art from all over. Just beyond is the open kitchen that gave a glimpse of the flurry of activity in the back of the house.

We were seated and very quickly greeted by Whitney, an old friend, who had anticipated our thirst and placed two vodka tonics on the table. After giving us the run down, she left to attend to other patrons giving me time to study the menu. And what a treat it is. From Aperitivos (appetizers) to Platillos (small plates) to tacos and tapas, nothing has been skipped. Executive Chef David Ferris said “After much travel and research, the menu was developed and reflects influences from the ethnic street food wave that has begun in many of the other regions of the U.S.” And it shows! In fact, I have friends in Birmingham that rave about a taco truck constantly! Everything from “Spanish Tapas with local influences for product selection” to “authentic Mexican tacos prepared with all fresh products,” is available. Ferris said passionately, “Our goal was to create the mood of sharing at the table.”

First up was fresh ceviche and guacamole made right at the table. Bite size tortilla chips were perfect for scooping up both. Next, Whitney placed our tacos while the table adjacent looked on, wide-eyed. I gave them a devilish smile as if to say “yes, I can eat every bite!” The tacos came two per order, and we requested the Baja Pescado (fresh fish), Carne la Vaca (flat iron steak) and the Hongas, a grilled portobello taco. The redfish was delicate with a little zing from the lime-cilantro slaw. The steak was tender as anything I’d ever had with smokey flavor and the veggie taco was savory and fresh.

From the Tapas list, we split the short rib and the mussels. The short rib is presented without the bone, atop Delta ground grits (made in Water Valley, Mississippi) with a sprinkling of black-eyed pea relish and is said to have been slow cooked for several hours. It must be true because the tender rib meat required a push with the fork to cut and it practically melted on my tongue. The mussels were served in a deep bowl so they could steep in a broth of white wine, tomatoes, garlic and chorizo. These little morsels were so tender and flavorful that I feared I might embarrass myself and ask for more. Topped with two pieces of fresh grilled bread, it could have been a meal by itself. 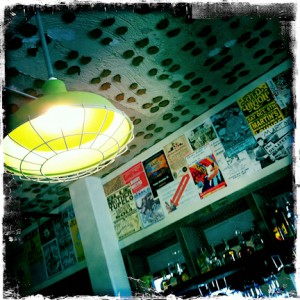 After patting my belly, a dessert appeared. Two Dulce de Leche Cheesecake squares sprinkled with powdered sugar and drizzled with Mexican chocolate sauce were, at once delicate and decadent. Had it not been a school night, I might have indulged in some tequila, as they have five different kinds of Patron. I decided to save that for another visit, keeping in mind their signature Baba-rita, the Latin Manhattan and Mojito too.

On Tuesday morning, I phoned my friend Ginger Williams. Known best for being one of our most talented local artists, few know she’s a foodie and a beer connoisseur. She gladly agreed to meet me after work for ’round two at Babalu.’ Ginger raved about the look and feel of the place. “I’d bring my out-of-town friends here first,” she exclaimed. “Hello! This is Jackson!” Chef Ferris says proudly, “We’ve tried to bring new menu items, different wines, exotic tequilas and specialty drinks that you can’t find anywhere else in the city.” I’d dare say anywhere this side of Birmingham.

Ginger and I shared the guacamole and the queso. Y’all, this isn’t the runny white cheese you find everywhere else. It’s fresh grated cheese served bubbling in a tiny cast iron skillet with a side of pico to stir in. While we were chatting up the next table over, our tacos arrived. She’d ordered the Carnitas which are braised pulled pork tacos, and I went for the fabled Carne el Cerdo, made of smoked pork belly. I’m certain there were stares as our eyes rolled back in our heads. Is there anything in life better than pork?

On the way out, I ran into a few friends. “What should we order?” one asked, all smiles. I instructed them to close their eyes and point at the menu.Here’s the long and short of it kids: Bring an appetite, because you can have any combination of food pairings and “family style” dining is encouraged. Bring a thirst, because there are limitless drink options made with fresh squeezed juices (no mixes here!) And finally, don’t bring pretense. This trip on the Latin side of dining isn’t so much about sitting up straight and using the right flatware as it is all about jumping in with both hands and taking in all the joy, sounds and flavors found in Latin culinary culture.