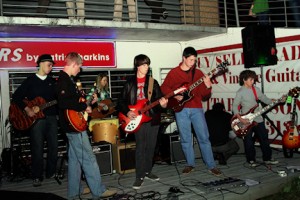 While today may be Friday, and the day most consider a wind down to the weekend, Fondren merchants are all wound up. After a highly lauded Fondren Unwrapped last night, some say they feel good about the upcoming holiday shopping season. ‘Great crowd,’ packed all night,’ and ‘amazed with the traffic’ were all comments we heard as we strolled the streets of the central business district. Fondren Renaissance associate director Mary Jo McAnally said she believed this was the best Unwrapped yet. McAnally said besides the great attendance, she was so pleased with the overall sense of security people felt as they moved from store to store. Jackson Police Department officers on patrol said they had had zero incidents. From Mississippi Girl Choir and Jim Hill singers to The Market in Fondren merchants lining Duling Avenue, the northern end enjoyed a well traveled portion of the event. The southern part of the district featured Sal & Mookie’s Pi(e) Lounge music from The Hustlers, while the central part of the show was stolen by the students of Fondren Guitars’ “Rock Band.’ A crowd of over 100 gathered to hear the students play classics from the Stones to Stevie Wonder.

Enjoy a sampling of photos from Fondren Unwrapped! And if you have great shots, we’d love to include them here (and of course credit you.)Â  Contact us!