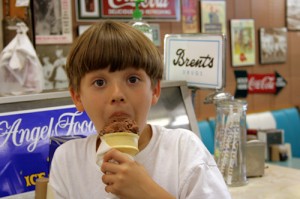 We were fortunate to have access to the King Edward hotel, now Hilton Garden Inn, in downtown Jackson during its renovation. It was an experience that we will never forget. We were able to see the restoration firsthand and fell in love with the rebirth the area continues to experience. It was where we thought we wanted to settle down. However, it seemed the lack of green space would not be ideal for the horse riding Kentucky girl and the mud pie making Mississippi boy.

Then we began to focus our attention on the Belhaven area.Â  We enjoyed many Sundays on the deck at La Cuzueala. Our visits were either preceded by or followed by top-off driving in the wrangler with the oaks blocking the view of the sky but enhancing the mystique and grand architecture of the homes. This is where we wanted to settle, or so we thought. it was the lack of the consistent “somethings” to do that kept us from there.

Fondren. let’s go to that “Fondren After Five” event and see what that’s about. it didn’t take long to figure out what it was about. It’s lively, but laid back. It’s funky but structured at times. Fondren is a bond. It is a bond of the Fondrenites that we felt as outsiders; all working for the one thing: unity. It is the eclectic eateries, all with their unique twist on the norm (which we have realized as new Fondrenites, the norm is what your heart tells you to do, wear, act and say). Fondren called us and we answered with hearts overflowing with the sense of home and of family. We firmly believe that Fondren, after only a few months, is where we were meant to be.

Langston Moore and Lisa Kennedy make their home in west Fondren. Their piece, “Why We Chose Fondren,” was originally printed in the Find It In Fondren Visitor’s Guide.