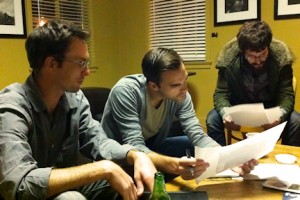 With the completion of Fondren Park fast approaching, plans are now underway for the community playground build and grand opening. Wes Harp, an architect for the project and West Fondren resident, spearheaded Friday night’s informal gathering at Sneaky Beans. The group discussed a mid December date for assembling play structures, hoping to call area residents into the mix. “You don’t need construction experience,” Harp said, “but simply a willingness to pitch in.” Trained workmen will lead community members in piecing together the equipment. Harp said a two to three day window would be allotted for the work.

Also in discussion, the park’s grand opening, with the group hoping for early spring and warmer temperatures. Leslie Foukal, another West Fondren resident, said she believes there would be a much larger crowd if the weather was more temperate. While not ready to say exactly what the day would entail, the committee dreamed of bands, food, old fashioned games on the playing fields, demonstrations by local chefs near the community garden and more.